Madrid Public Library Board of Directors

Early Out Grab and Go Kits

Tech Help Thursdays at the library

Early Out Grab and Go Kits 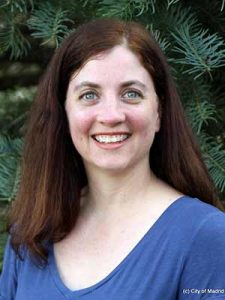 Angie Strong has been our library director since July 1, 2009.  She is certified as a Public Librarian with the State Library of Iowa.   She has two children.  In her spare time, she enjoys gardening, reading, and crafts.  She always welcomes comments and suggestions about the library from the public.  Her email is angie@madrid.lib.ia.us

The first library of Madrid was started in 1934 by the Madrid Parent-Teacher Association. Their first building was a little-used room in the City Hall, located over the old fire station and jail on Second Street (next to Historical Society).

In 1999, the library finally moved into their own building which has over 6,000 sq. ft of space and includes a workroom, storage, and a separate meeting room.

The library has always kept pace with the new formats and programming. Today the library offers books on CD, music CDs, DVDs, video games, downloadable e-books and audiobooks, and of course print books. The library has 8 public access computer stations and has wireless Internet access.

The staff has grown over the years from one librarian, to 6 employees, including several who are part-time.